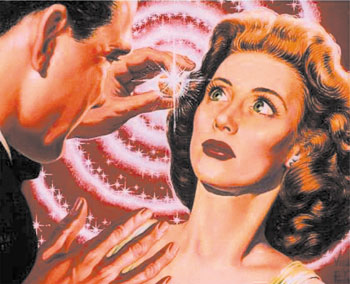 The Truth Behind Hypnosis Myths

There are a LOT of hypnosis myths out there!

So we thought we’d send you a quick email and answer a few of the most common myths we find in our inbox. We think you’ll find it interesting!

Afraid not — although all those old Hollywood movies would have us believe otherwise.

Hypnotists don’t have any special powers. They simply have the knowledge and experience to help induce a deep state of relaxation, and deliver the right kind of message to your inner mind.

Effectively, all hypnosis is *self-hypnosis*. You’re the one doing the work and changing your thought patterns. The hypnotist (or the hypnosis recording) simply facilitates the process.

“Hypnosis only works on weak-minded people!”

Wrong way round! It’s actually those who can focus and have a more creative mind that get the best results with hypnosis.

That’s because all hypnosis is self-hypnosis. You’re not being influenced by someone else. You’re actually guiding yourself. And those people with greater focus and imagination get much more powerful results with that process.

In an article for Psychology Today, Dr Deirdre Barrett, Ph.D wrote an article titled ‘The Power of Hypnosis’, in which she noted that “modern research shows that hypnotizability is correlated with intelligence, concentration and focus.”

“During hypnosis, you can be made to do things against your will!”

With hypnosis, you simply allow yourself to enter into a state of heightened suggestion. At that point, you can ‘reprogram’ your thinking patterns. You’re the active participant in this. If a hypnotist tries to tell you to do something that goes against your values, you’ll naturally reject it and jump out of your trance-like state.

“You can get stuck in a hypnotic trance and never wake up!”

This one is getting so old now, it’s almost funny. You can absolutely never get stuck in any form of ‘hypnotic trance’!

There has never ever been a single recorded case of this. The state you reach during hypnosis is similar to that of day-dreaming. You’re just super-relaxed. You can ‘wake up’ again whenever you want to. Usually that will be at the end of the session, when guided to do so by the hypnotherapist.

“Hypnosis goes against my religion! This is the occult!”

Hypnosis doesn’t go against any religion at all, and it isn’t what some consider the “occult.” Hypnosis is simply a safe and natural method of relaxing your mind, and feeding yourself with positive affirmations and ideas.

Hypnosis is a branch of psychology, and has absolutely zero connection to any religion whatsoever.

Another myth. There have been countless studies that have proved the efficacy of hypnosis in a wide variety of settings.

Hypnosis was approved for medical use in 1958 by the American Medical Association, and almost all modern hospitals now utilize hypnosis to some degree. It has a reported 90.6% success rate in stopping smoking. (The University of Washington School of Medicine.) It was found to be over 30 times more effective than regular weight loss routines. (Journal of Consulting and Clinical Psychology.) It was found to bring ‘immediate’ and ‘significant relief’ to 75% of women who used it to assist with their IBS symptoms, with 80% still reporting improvement up to six years later. (American Psychological Association.)

It has also been proven to dramatically reduce migraines, speed up recovery from surgery, reduce the intensity of pain, help overcome drug addiction, relieve chemotherapy symptoms, and lower blood pressure. It’s been found to be as effective as Ritalin in treating ADD in children. And those are just a few of the actual medical applications!

Hypnosis has also been used by thousands worldwide to improve confidence and self-esteem, release addictions, let go of fears and phobias, lose weight, stop smoking, improve brainpower, and much more.

Hypnosis is a fascinating subject that has long been surrounded with too much Hollywood myth.

We hope this post has helped to clear up a few misconceptions!

We look forward to seeing you again soon at the Hypnosis Live superstore: