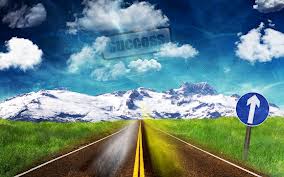 The Road to Your Success

Depending on whom you ask, success means different things. If you were to ask me, I’d say it means having a career that revolves around my real life. If you were to ask my cat, she’d say it involves finding a way to catch, immobilize and destroy her own tail. The first step in achieving success is often deciding what it means to you.

Chances are your answer is similar to mine. But whatever your version of success, people who want to be successful should mimic the behaviors of the great ones who came before them. These behaviors include:

Follow your talents. It’s helpful to be passionate about your pursuits, but passion without talent is like a car without a full tank of gas — it won’t get you as far as you want to go. The book The Element discusses this: no matter what you are good at — whether it’s writing, drawing, computer coding or motivational speaking — focus on that area and keep pursuing it. Everyone has a gift, so find yours and put in the time to make yourself better at it.

Focus your quest. In this day and age, the quest for greatness in one area has taken a backseat to the concept of universal genius, or the ability to accomplish greatness in many areas. While a nice notion, this quest for universal genius is one that is destined to fail. The reason is simple: no one can be the best at everything. Even in areas that are related, it’s often impossible to find an equally great level of success (see: Michael Jordan’s MLB career). So the road to success for some can be this simple: focus your quest on one big goal, and remember that a jack-of-all-trades is usually a master of none.

Limit your options. “Keep your options open” almost seems to be our country’s motto; I wouldn’t be surprised if it’s someday etched on the national currency. Our affinity for keeping options open unfortunately leads us to limit ourselves because it paves a road to mediocrity, rather than one to success.

Think about it this way: the person who goes to college knowing a job is waiting for them if they fail will never work as hard as the person whose only chance at success relies on their academic record. By limiting your options, you go all in, and force yourself to give your utmost effort to achieve a goal. Having a security blanket is important, so creating a backup plan can be worthwhile. However, making a commitment to one path or goal can also lead you to try harder — and potentially be more successful in your efforts.

Most people are obsessed with efficiency, which leads them to work towards goals that are meaningless, empty or simply unimportant. Effectiveness, on the other hand, is not about getting as much done as possible in a limited amount of time; rather, it’s about getting things accomplished that matter. Sending out 100 emails in an hour may be efficient, but it’s only effective if those emails are going to help you reach your goal. If they’re not, skip them (and avoid carpal tunnel in the process).

Never give up. If you are 5 foot 3 inches, slow and have a vertical leap that involves negative numbers, giving up on your goal to make the NBA is probably a smart move. But if you have a goal that is achievable through actual talent and hard work, don’t give up — ever. You will make mistakes, and you will fail. So keep practicing, learning, accepting rejection and trying again.

The vast majority of successful people were also huge failures at one point in their lives: Walt Disney went bankrupt, Benjamin Franklin dropped out of school at age 10 and Theodor Geisel (better known as Dr. Seuss) had his first book rejected by 27 publishers. Success comes from hard work, resilience and determination. No one gets it for free … unless, of course, you’re a Kardashian.